I feel like this article has to be written. I am very disappointed when a magazine like Cook’s Illustrated makes a goulash recipe and it turns out to be something else. I love Cook’s Illustrated and I forgive them. But let’s put things straight in the case of Hungarian gulyás. The biggest mistake people make is mixing up other Hungarian foods and calling them “goulash”. So what is gulyás, really?

Gulyás in Hungarian means shepherd or cowboy – somebody who tends cattle. And that’s where the name for the food comes from: while gulyás were off far away from their homes they made food from the available ingredients. For these trips they brought things that kept well: bacon, herbs and spices. In the beginning they ate it with bread and there were no potatoes or fancy stuff involved. The real revolution in cooking gulyás started in the nineteenth century when it found its way to home kitchens and restaurants. That’s when the potatoes, paprika and other things started to be used. In all cases, the gulyás is a thick soup or thin stew made of onions, peppers, tomatoes and spice with added meat, potatoes or other ingredients depending on the region or the person who makes it.

Where do people make mistakes? There are plenty of Hungarian “gulyás-like” dishes which are not gulyás like:

Tokány – tokány is a meaty dish. The onions are steamed and not sautéed, and the meat is cut into strips. It has a thick consistency.

Pörkölt – most mistaken for gulyás. The basis for pörkolt is very gulyás-like, but while gulyás has a thick soup- almost stew-like consistency, pörkölt has a thick, true stew consistency. The basis is just onions, peppers, tomatoes, cubes of meat, spices and a little bit of liquid. It is poured over dumplings (nokedli) or eaten with bread.

Paprikás –is almost like pörkölt, but is prepared a bit differently. Some regions do not differentiate and they make only one kind of paprikás,  the famous chicken paprikas.

Czech Hungarian Guláš – this fake gulyás is a part of Czech cuisine. Basically, it is simplified pörkölt eaten with knedlíky (steamed bread), a Czech speciality. With a good local beer, it is a tasty Czech classic, but it is not Hungarian gulyás. I wonder why they don’t call it Czech goulash?

Czech/Slovak Szegedínsky Guláš – this is a weird meal. It is a pork stew with sauerkraut and sour cream. It is also eaten with knedlíky. I have to say I rather like it. The oddity is that it has nothing to do with gulyás or with the Hungarian city of Szeged.

Gulyás, together with Hungarian fish soup (Halászlé), is the barbecue of the Hungarian people. Imagine a burger. You can make in a pan at home, but what a difference when you grill it on a barbecue! Similarly, gulyás is traditionally made in a huge pot over an open fire. Often families will organize a cookout, where everyone hangs around playing soccer, arguing over politics, drinking beer and waiting for the gulyás to be ready. It’s not at all uncommon in the summer months to see groups of people climbing into trains at the Budapest stations, carrying a gulyás pot and three-legged stand to go somewhere in the countryside for a picnic. If you decide to serve gulyás, make gulyás and not something else. It is like asking for a hamburger in a Hungarian fast-food stand and receiving an unidentifiable object and lettuce on a bun. (Which is also a classic here, but that’s a story for another post.)

Here is a recipe and a video on how to cook gulyás, featuring a gulyás master, a.k.a. my dad. Enjoy. 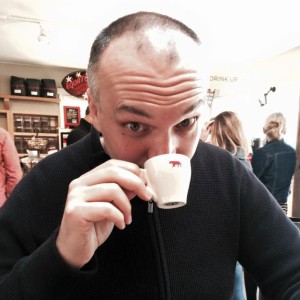